I thought it was time for an update on what's going on, as Marvin Gaye and Delroy Wilson would say.

Well, Dingazz Music released the song 'One' in October which is a collaboration with Jackie Scales a vocalist from the US. I wanted a bit of an urban feel to the song and Jackie's singing style was what I was looking for. If you haven't heard it the theme is that we can all make a difference 'it only needs one to make a stand'.  You can hear it here. 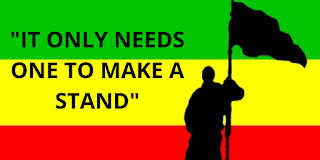 If you follow my music you know that my songs normally have a message. Not an in your face message, that's not my style, but more in the way of ' have a think about what I just said'. Anyway, the next single is in production and is another collaboration.

The last two singles have been collaborations as I wanted them to have someone else's spin on the lyrics. Also, to have a different dynamic in the vocal. For me, it just adds to the creative content of the song. However, this time I am collaborating with a Jamaican vocalist and musician with great talent.

I was trying to decide on the vocal style for this song and had a few vocalists in mind when I came across a couple of his demos. His style suited the song so we made contact and went from there. As part of the pre-release promo, I'll be doing an interview with him so keep following this blog. You'll also be the first to see a preview of the video. Hopefully, to be added to your YouTube music playlist 🤞.

The song is a roots reggae track and the working title is 'Every Decision'. I originally wrote the song lyrics in 2014 but I was never satisfied with the verses and the storytelling. So, I moved on, it was in my list of songs and I came back to it every now and then. However, I liked the chorus and wanted to finish it so the verses have been re-written and it's pretty much a new song. If you are a songwriter you will understand the struggle with song lyrics, if not, this is a little insight into my creative process.

The song idea really came from some the dramatic events that were occurring at the time worldwide like terrorist attacks, mass shootings and air crashes. In all these events you would always hear a comment from someone who made a decision or circumstance dictated an alternative action which meant they avoided the event. This led me to the first line of the Chorus:

"Every decision that I make still shapes my destiny"

From that one line came the rest of the chorus. I then just had to write the verses and that is where the struggle started.

The song is not melancholy, in fact, its mid-tempo with a hook and is more about taking control of life and making the most of it. The last line of the chorus is:

So that's the story of the song lyrics. I am really looking forward to finally getting the song out there. I feel it is a message worth telling. More details in upcoming posts.
Here's to more music and new music.