Is Releasing a Music Album Worth the Effort?


"So is the album concept a thing of the past?"

The way consumers listen and buy music has changed. There are so many platforms like Spotify, iTunes and Deezer available for downloading and streaming music. Although CDs are clinging on to existence and there is a revival of vinyl, digital listening is now the norm. With albums, consumers can now listen and purchase on a track by track basis. What does that mean for us creators of music?

There was a time when an album could be sold off the back of a hit single from the album meaning the other tracks did not necessarily have to be of the same quality. It was quite common for some tracks to be 'filler' tracks i.e. they would not stand on their own as singles. However, often, this did not stop the album from being in demand.


Nowadays, the digital platforms list albums by tracks. The consumer can listen to individual tracks and purchase the tracks they like without purchasing the whole album. So is the album concept a thing of the past? Well, an album is still recognised in the industry as having intrinsic value. There is still recognition by the top award organisations and even having an album nominated gives the artist tangible benefits.

However, for the typical indie artist trying to get their music out there, track by track purchase means that for the production of an album there is a greater burden on production and song quality. Unless the album is a concept album where each track has a part to play in the unfolding of the concept and therefore need not be capable of standing alone, each album track now has to be seen as a potential single. This means that as an artist or producer you really need to take a view on the return on investment of time and money in the production of an album.

Many commentators state that for success and growing your fan base getting content out there should be the main objective. So is taking 18 months to put an album together really worth the effort? Many artists recognizing the continued status of an album, especially if you are a touring artist, have gone down the road of EPs. This can make a lot of sense as producing four or five tracks is a lot quicker than a full album. 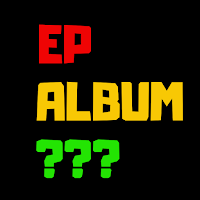 An EP or full album is always a great basis for a tour or launch event and a great addition to the merchandise table.

At the end of the day, the decision whether to produce an album depends on where you are in your journey and the resources available in respect of time and money.

The options are definitely worth looking at. Is it better to produce a single every month and keep your fan base engaged? Is an EP every six months better than an album every eighteen months?

In this new consumer-driven industry the market is now track based. The consumer can now make their own albums with the advent of playlists. Playlist curators now hold some sway on platforms especially those with large followings. Although artists also have this facility using services like Spotify for Artists.

Albums still have a place and I don't think they will disappear. They are a means of telling a bigger story and maybe this is how creators of music need to adapt them. After all, nobody would buy just one chapter of a novel and even if they could, hopefully, that would lead to the purchase of the remainder of the work.