The Butterfly Effect and Songwriting 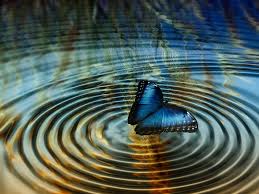 ... a butterfly flapping its wings in Brazil can cause a hurricane in Texas

I'm starting off a little deep with this post. Chaos Theory and The Butterfly Effect so bear with me.

According to Wikipedia Chaos Theory is:
... a branch of mathematics focusing on the behaviour of dynamical systems...
... At any given time, a dynamical system has a state...
... The butterfly effect describes how a small change in one state can result in large differences in a later state, e.g. a butterfly flapping its wings in Brazil can cause a hurricane in Texas.

I am definitely not going any deeper other than to say I've always been interested in this particular theory because, in my view, it goes a little way to underpinning philosophical statements like, 'what goes around comes around' and 'everyone can make a difference'. It would seem to suggest that small actions can indeed lead to greater outcomes. So as an individual, whose is part of the world socio-economic system, maybe I can take some small action that one day may lead to something substantial.

Besides the butterfly effect, I was always struck by how, whenever there was a catastrophe of some sort, there was always a story of how someone's bad luck or good fortune was the result of a specific decision they had made. For example, missing a flight, changing flights, arriving early or arriving late just everyday decisions. So it would seem that every decision we make has an impact.

This thought led to a songwriting idea and led me to write the song 'Every Decision'. Here are the lyrics from the bridge:

Although the butterfly effect, mathematically relates to certain types of systems, the concept of small actions leading to greater outcomes is something that exists in many cultures. When songwriting, I do find that one idea can lead to another with the connections not obvious to me but I'm still happy to have found the lyrics. 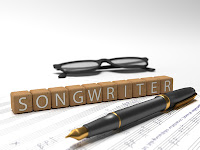 So I have learnt not to force the process if things aren't going well with the song. Sometimes I just leave the song and do something else and somehow the next line pops into my head when I least expect it.

The butterfly effect is something that gives me encouragement when songwriting. I know to just take one small action whether it is writing the title, writing the keyword of the song anything to set the songwriting process in motion and leave it at that. Knowing that something more substantial will come about eventually. It may not turn out to be what I want but I can make that decision when the time comes.

So ending on a philosophical note, maybe the butterfly effect is something to recognise in all aspects of life. Take that small step, take that first action and who knows where it may lead.