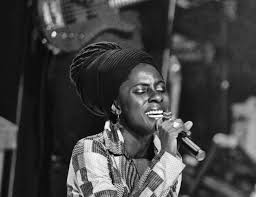 Jah9 Born Janine Cunningham, from Falmouth, Trelawny, Jamaica. She grew up in a family where the deeper meanings and injustices of life could be reasoned and this aided her inner growth.

Her father was a preacher and her mother a social worker. She subsequently moved to Kingston and at the University of the West Indies, her exposure to the teachings of Rastafari and roots reggae dub music was the catalyst for her to take the next step in her music career. Janine adopted her childhood nickname, Jah9, as she learnt the real significance of the word “Jah” and the number “9” (the symbol of creation and womb of the universe, divine completeness, universal love).

Her music career began to take shape driven by her spirituality and her own 'Jazz on Dub' style of reggae. With assistance and guidance from keyboardist Sheldon Bernard, the legendary Beres Hammond, and producer Donovan Bennett she released her first singles. This led to her debut album entitled “New Name” which was produced by Rory ‘Stone Love’ Gilligan.

The song immediately presents celestial like horns calling for the attention of the listener and Jah 9 gets straight to the point from the first line 'Tell me what you ready for' and then the song goes straight into the chorus laying down the core message for the listener.

This immediately sets a positive vibe drawing the listener in who is then primed for Jah9 to then expand on the message. 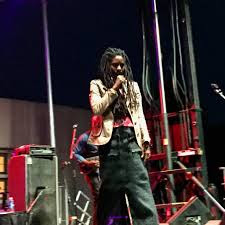 The lyrics set out and reason the challenges and strengths that can be experienced before you can be a soldier to 'Battle for a Brighter Day'. Jah9 drives the sentiment with a genuine quality that makes the listener feel these are not just lyrics but a heartfelt call to action. The driving riddim helps to underpin this call to action and Jah9 uses the energy of the track in her vocals so that the lyrics feel meaningful even before you absorb the message behind them.

Jah9's love of dub is reflected in the production. Mainly drum and bass with some colour by the piano and Hammond sounding organ give a platform and space for Jah9's lyrics to be clearly heard and not clash with the riddim. This style is reminiscent of dub instrumentals from the seventies and eighties like Bunny Lee's Aggrovators but the electronic bass gives the riddim a modern feel.

This is a song that I would listen to with no distractions so that I could fully absorb the lyrics. You need to play it several times to capture the essence and meaning of the individual lines. Jah9 does not pad out this song all the lyrics are meant to impart knowledge or enlighten. For fans of Jah9 and fans of conscious reggae, this song delivers the content and elements the listener would expect to find.

A conscious song, listen to clear your mind and focus on your potential so that you can be 'ready fi di feeling'.